Ladies and Gentlemen, if I may, Weird Al

Though frowned upon in socially adjusted circles, Weird Al has never been less than an endearing presence in my itunes library, a reminder of a time before I stumbled upon the wide world of popular music.  Many artists, in fact, I directly owe my introduction to the eternal Mr. Yankovic, and so it was no surprise that I was mildly anticipating his latest album, first in five years, Alpocalypse.  The album, well, it was ok.  "Perform This Way" neatly skewers the worst Gaga song to date, though even that was hardly a highlight.  "Party in the CIA" fares much better and gets a few laughs in the process, and there's better still (as you will see, oh so shortly).  But mostly I'd count this as minor Al, a far cry from his highs in 80s, or even the all-around solid Running With Scissors.

But as an Al-fanatic, loyal enough to share a few words, though not enough to muster a full-on review, I thought instead I could muster up a list.  A list, of course, of my favorite Weird Al tunes to date, parodies, inspirations and originals alike, and accompanied where possible with video links.  A top 10 seemed too little, a top 25 too arbitrary, so I settled on 15, though feel free to refer to the bottom five as honorable mentions.  Nope, fuck that, there can only be one honorable mention on a list of Weird Al songs; the one I'd secretly love to mention but can't bring myself to speak of, "Albuquerque."

Some of his most morbid lyrics, but they're put to excellent use considering the subject matter.  It may seem dated, but it still gets laughs, and is infinitely more interesting than the song it's parodying.

Spot on, Al, spot on.  This one is funny, but no less is it depressing, at least for the many creative souls out there toiling away under the harsh realities of the real world.  And also, totally the highlight of his most recent release.  The guy's still got it.

12. Dog Eat Dog (Polka Party)
Less well loved are Al's many style parodies, the ones that don't tackle one song in particular, but instead ape a band's entire style.  Most successful are the ones that latch onto bands with a sound entirely their own, and there's no mistaking "Dog Eat Dog" for anything other than Talking Heads.  His cries of "this is not my beautiful stapler!" have me in stitches every time.

Ha! "MacArthur Park" is such a bizarre song in its own right (and pretty obscure too unless I'm mistaken), but Al totally gets this right.  It's one of the best of his many movie parodies, and major points for the unconventional choice in source material.


10. Why Does This Always Happen To Me (Poodle Hat)

Yet another from no one in particular, though Ben Folds is backing up Al on piano and that's surely only adding to the fun.  And man, those lyrics, they're easily some of the bleakest, funniest the guy has ever concocted.

This one's almost too easy, isn't it?  Al takes disposable pop fluff and amplifies the disposable ten-fold.  And somehow, it amazes me.  I don't particularly love the original, though I suppose it's a bit of a guilty pleasure, but this makes it seem all the most frivolous, and I have a soft spot for frivolous things.

Certainly my favorite Al song as a child.  "Bad Hair Day" was the album that first fell into my hands all those years ago, and while I don't actually think it's as strong on the whole as many of his others, there were some crazy highlights and this was one of 'em.  It's so gloriously violent, and was exactly what second grade Tristan wanted to rock out to.  And still, I can't help but be amused.


7. Everything You Know Is Wrong (Bad Hair Day)

And let's stick with "Bad Hair Day" for a while longer, because like I said, it had some crazy highs to it.  This one's an original, done ostensibly in the style of They Might Be Giants (certainly kin to Al in many ways already) but it also seems so quintessentially Al to me.  It's wacky and breathless and a total blast, with lyrics that are more amusing than laugh out loud hilarious.  Always been a favorite.

My obligatory nod to UHF, but it's a damn fine parody even aside from that association.  One of Al's most polished pieces to date, though it helps that the original song is killer too.  I've been trying to just these songs aside from the merits of their music videos (or "Fat" would surely have placed) but this one is just oozing with 80s nostalgic goodness.

Another perfect music video, but even better is Al's take on Nirvana's most beloved song.  One of the rare examples of the parody directly referring to the source material itself, and it works so well of course because of how iconic this one was instantly.  But that only makes this funnier, no?  I mean, I'm always giving Nirvana a hard time, and this even makes me smile.  A pitch perfect send up of the song of a generation.


4. The Saga Begins (Running With Scissors)

The movie isn't even very good, and I'm no great fan of Star Wars in general, but that's how sure I am that this is one of Weird Al's finest hours.  It's fittingly epic, and more than just a rehash of the plot, it works in some genuine laughs, many by the sheer amusement of seeing Al tackle Don Mclean.


3. Like a Surgeon (Dare To Be Stupid)
And at last we get deep into some classic 80s Al, which on the whole is so much stronger than his recent stuff, even if the true classics seem fairly evenly dispersed across his career.  Anyway, this one holds a special spot in my heat, because at my 6th grade Junior High All-Night Lock In, I stood up in front of everyone an did karaoke to this gem.  And though it went over well, I haven't returned to the stage sense.


2. Nature Trail To Hell (Weird Al in 3D)
Although this marks the first and only appearance of Weird Al in 3D on this list, I maintain that on the whole, it's Al's strongest album of all.  It ends on this glorious note, an Al original that is epic, intense and hilarious, and anything, anything but lazy.  The backwards vocals are a nice touch, though I actually like the darkly comic odyssey just fine as it is.  Did I say like it?  I mean love on some weird, socially inappropriate level.  Love it like I love Starship Troopers, or maybe Ernest Goes to Jail.

Could it have been anything else?  Coolio, quite frankly, can suck it, though I do see where his hatin' was coming from, considering how this is ten thousand times better than his beloved original.  Clever concept, fantastic production, and spot on delivery make for what may be perhaps the definitive parody song ever, and surely Al's finest hour.  It was the first song of his I ever laid ears on, and I've yet to hear him top it.
Posted by Tristan at 12:22 AM 2 comments:

Terrence Malick's Party at the Dawn of the Universe

Terrence Malick's Tree of Life is going to either enthrall or infuriate you, and for the sake of laying all my cards on the table, I'll say I fall into column B.  The divided reaction has been par for course since the Cannes premier, and in retrospect it should come as a shock to no one, since Malick's films have hardly played to the widest demographic.  And yet it never occurred to me that my reaction would be anything short of awe, which could be on account of the hype, but I think more likely is because his last film, The New World, I'd proudly count among my 50-or-so favorite films of all time.  Nevermind that of his other three films, I only love Badlands, I was blindly certain that Malick wouldn't let me down.

Thing is, I'm hardly bitter about it.  Frustrated expectations don't equate to poor cinema, not in my book, and hopefully not in yours either.  Tree of Life was somehow everything I thought it would be, and yet not at all how I thought it would feel.  My opening pronouncement wasn't a pan so much as an attempt to chisel away at the wall of hype surrounding the film (an example of such excesses: Landmark Century was showing the film on four screens, mid-afternoon).  Of course, considering the scope of the film, from 1950s family tragedy back to the dinosaurs and out to the cosmos, hype was unavoidable, and let's not forget that at the helm sat the most mythically reclusive of directors.  Terrence Malick's fifth feature film in nearly forty years, Tree of Life is both his most ambitious and most personal, which oddly may be the very two things keeping me at a distance. 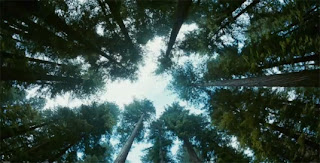 Ambition works in funny ways.  It's something I'd never want to curtail, and I'd rather watch an over-zealous misfire than something safe and lazy any day, but it can get to a point when there's just too damn much on the plate.  It's unfair to measure this simply through the amount of existing footage, but a correlation often exists there, and it only amplifies as things drift further and further away from linear narratives.  Somehow knowing scenes of a film are infinitely re-arrangeable takes away from the experience for me, not unlike the disappointment of grappling with various directors cuts and alternate versions of films.  That's not to say great successes can't emerge in this fashion, but Tree of Life never quite justifies its prehistoric tangents and other flights of fancy.  Makes for some breathtaking imagery though.

The deeply personal story at the film's core has more substance to it, though how resonant that will be probably hinges largely on your own upbringing.  Aside from the common ground of growing up with two brothers, very little here felt familiar to me, and I'd like to think that was why it never struck a chord.  For better or for worse, Brad Pitt and Jessica Chastain are more embodiments of ideas than actual characters - to no fault of the actors, who are marvelous - because as the narration spells out all to clearly for us, they symbolize the way of nature and the way of grace respectively.  It's a dynamic that actually comes through magnificently with little help from dialogue whatsoever, save for the largely unnecessary voice-over, but again, it makes everything exceedingly hard to map onto most familial relationships, which are just a shade more complex. 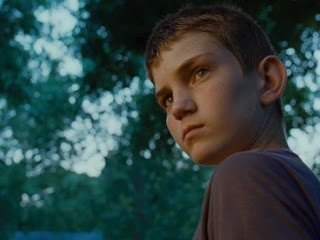 But caveats aside, Tree of Life was still a very fine film, and that it's so obviously a labor of love isn't lost on me.  That's why when carefully considering what films, if any, this may have a counterpart in, I arrived at one and one alone, made of another mythic director of minimal output: Andrei Tarkovsky's Mirror.  Both are unabashedly personal journeys that we the viewer are asked to come along on, and while I get the sense that Malick, like Tarkovsky, got more out of his film than I did, it was still an expedition I was proud to come along on.  And with that, I hope I've found a way to sufficiently swing this review into the positive camp, because I really did like The Tree of Life, however miffed I may be that it didn't change my entire perception of cinema.  So, ladies and gentlemen, check your expectations at the front desk, but please, do give this film a chance.  I've got a feeling we'll be debating this one for some time.
Posted by Tristan at 8:56 PM No comments: