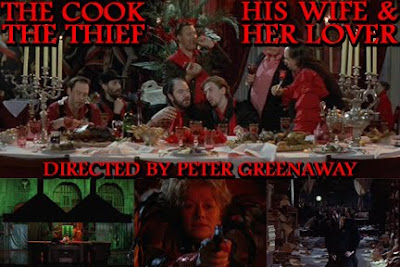 Never have the elegant and the perverse tangoed so well as they do in Peter Greenaway’s The Cook, The Thief, His Wife and Her Lover. On the one hand you have Greenaway’s formalism, Sacha Vierny’s sophisticated cinematography, and the haute drapings of the cast and set. On the other you have a steady stream of vulgarities enacted by the tyrannical louse that presides over the film, Albert Spica, the titular Thief. Played with devilish intensity by Michael Gambon, he holds court over his stately pleasure dome, the cavernous restaurant Le Hollandaise. Spica’s as contemptible a character as there ever was, a grotesque and boorish man who inspires such boundless hatred that no fate could possibly seem nasty enough for him. He runs amok across his restaurant, tearing down or sticking a fork in whoever upsets him, followed dutifully by Vierny’s gliding camera, which seems to indulge him as much as he indulges himself. His presence is positively oppressive: to the viewer, to the kitchen staff, and especially to his put-upon wife Georgina.

The twin pleasures of The Cook, The Thief… are food and sex. The former preoccupies Spica’s mind to the point of madness (virtually all his assertions of dominance involve consumption) while it is the later that his wife turns to for reprieve from his reign of terror. Georgina, the icy and alluring Helen Mirren, begins secretly stealing away from dinner to make mad love to a fellow patron of the restaurant, their relations, like the preserved food surrounding them, always walking a fine line between good and bad taste. Of course, the two specialties of Le Hollandaise are destined to collide, and Spica’s discovery of the ongoing affair sets off an outrageous escalation of events leading to the greatest dish of revenged ever served. The most disturbing thing, and that’s surely saying something, is how sweet the catharsis tastes.

Posted by Tristan at 6:03 PM No comments:

Labels: Helen Mirren, Michael Gambon, Peter Greenaway, The Cook The Thief His Wife and Her Lover 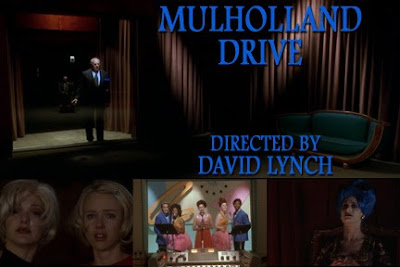 A tragic woman pours her soul out in song at a sparsely attended nightclub performance as Naomi Watts and Laura Harring look on and weep. The singer’s emotional investment appears staggering, and that her performance would move any viewers to tears is hardly a surprise. Calling to mind Anna Karina in Vivre sa vie watching Maria Falconetti, it’s a delicate and beautiful moment that underscores the power of art to take root deep in our emotions and speak to our own unique experiences.

That’s when you feel the rug get pulled out from under you. The chanteuse drops to the stage floor in a dead faint and still the song plays on – she’s been lip-synching, it’s all a ruse! – a little blue box opens and suddenly artifice interferes with art. It’s in that moment that Mulholland Dr. starts making even less sense than before, careening into the realm of dreams within dreams and films within films. Two curious girls play a dangerous game of house across metro Los Angeles in which the roles get increasing muddled and we swiftly lose track of whether we’re looking into the dollhouse or looking out. I’ve long since given up my quest for a clear understanding of the film, instead marveling at the divide between those putting on a performance and the often unseen forces that seem to be directing them.

And there’s still the immense pleasure of just surrendering to the whole experience. Just as in the Club Silencio sequence, Mulholland Dr. is fueled by knee-jerk emotional reactions. The botched address book theft and the absurd reaction to an inconveniently timed affair are both hysterically funny, the sapphic romance and unceremonious masturbation session are tailor-made to provoke one way or another, and the entire episode at Winkies is nothing short of the scariest scene of the last decade. The film seems to owe as much to the body genres as it does to noir. So mesmerized are we by our search for meaning in these bizarre visions that we don’t put a second thought to just how manipulated (and I say this in the best way possible) we have been, nor would it ever occur to us that maybe, just maybe, that little blue box serves no greater purpose than the man behind Winkies – to ignite an instinctive emotional reaction, in this case one of sheer bewilderment. Hats off then to David Lynch, who may have just found a way to reveal a trick without shattering the illusion, because whether art or artifice or anything in between, Mulholland Dr. resonates time and times again.

Posted by Tristan at 4:52 PM No comments: 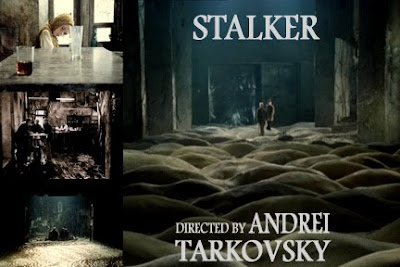 There’s really no precedent for a story as linear as Stalker’s to appear to take such mighty turns. It’s science fiction devoid of technology, a horror film minus the monsters, and a road movie without any detours; two and a half transfixing hours of mounting tension and dread, punctuated with a handful of extraordinary shots that amp up our astonishment in ways only the best plot twists ever could. The first comes early on, as the titular Stalker leads the Professor and the Writer into the fabled Zone, a mysterious and dynamic space that houses at its core the answers to everything. In an endless tracking shot, the travelers leave behind the bleak, colorless world of man and enter the lush, hallowed ground of the Zone. The transition to color is so subtle that by the time it hits you, a gasp in awe can hardly be helped. Such remarkable shots are prone to happen in Tarkovsky films, and nowhere are they as abundant or as staggeringly beautiful as in Stalker.

That doesn’t make this easy viewing; in fact, I can’t think of a more grueling film experience. If Stalker is a horror film, then it’s because it confronts the viewer with the most terrifying prospect of nothingness. Chilling as the Stalker’s cryptic tales and the overgrown landscapes they traverse are, the real terror lies in the threat that their search for meaning will turn up empty. The Professor clings to his knowledge, the Writer to his legacy, and the Stalker to is family’s meager existence, and although deeper motivations abound, there’s a mutual drive to make sense of it all, and for the Stalker in particular, to justify all human suffering. They risk all manner of peril within the Zone for such basic answers, but one gets the sense that their journey is doomed, and the proceedings will reduce anyone to a hollow shell, sapped of all life and hope.

But true to form, Tarkovsky leaves us with a final shot that turns, tosses, and topples the tables in such a way that an entire meaning of the film can be amended in seconds. Simple, haunting and unexpected, its power and effect are unparalleled. Quite suddenly the most emotionally draining of films has a fire lit under it, and as the final punctuation mark, it’s the one that seems most definitive. It’s an extraordinary ending, but with Tarkovsky’s track record and the mesmerizing journey that precedes it, anything less would be a disappointment.

Posted by Tristan at 3:58 PM No comments: