Fear and Loathing on the Oregon Trail 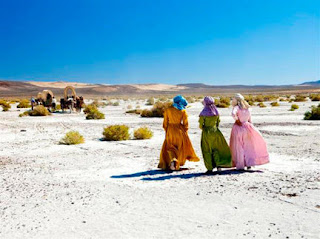 There are a handful of reasons why Meek's Cutoff has attracted a trifle bit more attention than the average indie release.  Most notably, it's a Western, which in the current cinematic climate is like being the albino buffalo in the herd.  It also boasts a pedigree of indie film royalty, with a cast including Paul Dano, Bruce Greenwood, Shirley Henderson and the belle of the low-budget ball herself, Michelle Williams, who re-teams with director Kelly Reichardt after their critically lauded collaboration, Wendy and Lucy.  Notice that Williams takes the central role and, well, do the math from here, that makes Meek's Cutoff a female driven Western, albeit one that's low on dialogue and high on ensemble.  The results may bore casual viewers, or even offend fans of the genre's classic entries, but one could make the argument that Reichardt's film is a milestone for Westerns much in the same way McCabe and Mrs. Miller was forty years ago.

I don't know that I'd go quite that far.  Meek's Cutoff arrives in a year where female protagonists have taken almost as many beatings as they've given, but it plays out in a genre that practically doesn't exist anymore, and could make its point in a quieter way.  That sounds like a complaint, but it's actually a great strength of the film, and I wouldn't dream of holding against it all the problems in Hollywood it will fail to right.  What I love most about the film is the way it gradually assumes the female gaze, taking root early on as the important conversations of menfolk are observed at length from the road-weary wives.  Halfway through, William's character Emily has slid comfortably into the protagonist role, at one point even holding a gun to the titular Meek, the rugged, cocksure, and slightly bamboozled symbol of manliness in an outmoded genre.  The end, in one of those gloriously vague parting notes that will take some viewers time to come to terms with, is essentially a passing of the baton, and while it won't satisfy those looking for old western thrills, it perfectly fulfills the narrative Reichardt sets out to tell. 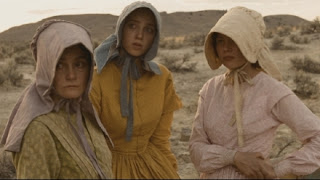 I suppose I can muster some sympathy for those seeking more excitement.  The stakes in Meek's Cutoff are clearly high, but I don't think they're raised sufficiently throughout the course of the film.  Fear exists in many shades on a trek across the Great Plains, but while Reichardt does a superb job establishing the dreaded threat of Indian attack, the cruel indifference of nature rarely resonates like it should.  But this is a minimalist Western, and since I did my homework, that's exactly what I went in braced for.  The nine characters of the film might as well exist in their own universe, and even the slightest hints of civilization are nowhere to be seen.  The barren screen still leaves a few things to marvel at, such as the postcard-worthy photography and lively costume design, but this is a film defined at first-glance by its pace.  If the thought of that turns you off, though, consider for a moment the second-glance, which through inverting the gaze of classic Westerns, has something valuable to offer cinema in 2011.
Posted by Tristan at 10:39 PM No comments:

Cave of Forgotten Dreams: or The Crocodiles Who Look Back Into The Abyss of Time 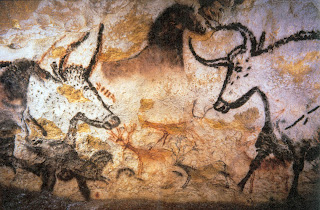 As summer blockbuster season comes fully into bloom, the most prolific superhero of the last decade also returns to theaters, this time, wouldn't you know it, in 3D.  I'm talking, of course, about Werner Herzog, the maverick madman of German cinema, and recent usurper of Morgan Freeman's reign as documentary narrator extraordinaire (Encounters at the End of the World is, after all, the anti March of the Penguins).  And while Herzog's narrative features of late have had mixed results, it's in his most recent documentaries that the reckless spirit that characterizes earlier masterworks like Fitzcarraldo and Aguirre: The Wrath of God most fully comes through.  His latest is a three-dimensional journey into the prehistoric Chauvet Cave in the south of France, and bears a name befitting any Herzog meditation - The Cave of Forgotten Dreams.

Here's your 30 second background lesson.  Rediscovered in 1994, Chauvet Cave contains the world's oldest known cave paintings, some of them dating back over 32 thousand years.  Fearing human damage such as that in Lascaux, the French government has greatly restricted access to the caves, limiting traffic to a handful of archeologists, anthropologists, and lastly, surprisingly or not, to Herzog and a minuscule film crew.  They were granted one week and a mere few hours each day, and it's from those short visits that the lion's share of the footage in Cave of Forgotten Dreams comes from.

The 3D element is bound to pique the most curiosity, as this is really the first we've seen of the technology popping up somewhere other than a special effects extravaganza.  Herzog's justification is  that the extra dimension was necessary to capture the contours of the cave walls, upon which the drawings rely, and upon beholding every bulge on every bison, there can be no doubt that his instincts were correct.  The previous images of cave art I have in mind seem to exist on a flat canvas, but these drawings gain motion from the curvature of their surroundings.  A 3D skeptic if there ever was one, I can take some comfort in knowing that in the right hands - a Herzog or a Cameron, say - it's a technology capable of elevating the medium under the right circumstances.  Considering how easy it would have been for an old dog like Herzog to dismiss 3D as a childish gimmick (which, granted, it often is), his open-mindedness is commendable, and the results are to everyone's benefit. 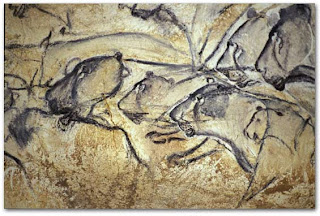 That's not to say that he has a total grasp on the technology just yet.  While many of the cave shots are mind-numbingly majestic, there's a fair share of clunkly camerawork, probably just as much a fault of the time constraints as any differences in shooting.  He also succumbs later on to the temptation of having objects dart at the screen (in this case a spear), and one researcher's mustache gains particularly vivid life thanks to 3D capabilities.  The other barrier standing between this and Herzog's greatest films is the loose structure, again, a likely product of the rushed shooting schedule.  The cave drawings a mesmerizing, and one could conceivable gaze at them for hours on end, but the film is light on content, and Herzog's philosophical musings are even more speculative than usual.

Alright, that last point isn't really a complaint.  In fact, there's plenty of fun to be derived from the batty half-theories, such as the improbable closing line that we somehow arrive at, "Are we today the crocodiles who look back into the abyss of time in Chauvet Cave?"  Yes, somewhere in the postscript, he brings crocodiles into the equation, and like only Herzog can do, makes them not seem entirely out of place.  Much in the same way that certain individuals seems drawn to him, whatever the film, whatever the subject.  Take, for instance, the French perfume expert who looks like he walked out of a Jean Rollin film, or the scientist decked out in reindeer fur who actually pulls out the replica of a primitive flute and begin to play terribly.  Did Herzog goad him into this, or was the man already so caught up in the director's past obsessions that he voluntarily went there?  Or is it that even when chronicling the history of a room unoccupied for thousands of years, Herzog can't help but find common threads to all his past work?  Whatever the case, Cave of Forgotten Dreams is a must see for fans of the director, and it may just be the 3D event of the summer. 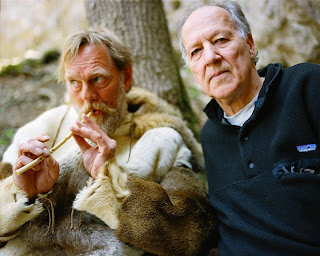