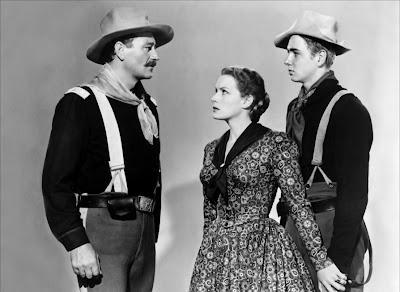 There's nothing like a movie-watching milestone to add a little context to your obsession. Last night after watching John Ford's often overlooked Western Rio Grande, I opened my trusty Excel sheet and checked off my 800th movie from the list of 1001 Movies to See Before You Die. Today, I think that calls for a moment of reflection. The list exists in a big red volume that to date has seven editions, the one I'm working from being the oldest (I believe). Mine ends with Kill Bill Vol. 1, whereas the current one ends with Paranormal Activity (automatically invalidating it, no?). I would guess that I've actually seen 800+ from the updated version, given how top heavy it is, but I'll fill in my later gaps in due time. You can find this year's incarnation here.

Here's my abbreviated history with this list. Four years and several months ago, I was just starting film courses at Michigan State, just starting to post at Culturish, and just starting my dependency on netflix. To navigate these far-reaching corners of the entertainment world, I needed something to lean on, and this list became my crutch. It got me through the classics, it introduced me to countless favorite directors, and it certainly had a hand in making me the freakishly star-eyed cinephile I am today. In September 2006, I had seen 119 films from this big red bible. If you do the math, between then and now, that amounts to a metric-fuckton.

My point - that I can't recommend this list enough. Sure, it's far from perfect, and if you're looking for a more accurate assessment of greatest films of all time, then I recommend swinging by They Shoot Pictures, but everything you need to open your eyes to the frickin' possibilities of movies is right here. Some of the recent additions aside (forgivable, because it takes at least a decade to begin seeing films in context) this is a tremendously well balanced list. It places blockbusters alongside arthouse alongside avant garde and generally finds sterling examples from all camps concerned. It doesn't omit any classics, which are the entries I gravitated toward for the first few years, and from there offers recommendations spanning more decades, countries and film movements than you're likely to find on any other list.

Ther lion's share of my favorite films appear here, but not all, which isn't much a point of contention since I often first became aware of the directors thanks to the list. The Scarlet Empress doesn't make an appearance, but Blue Angel and Shanghai Express are, and those movies undoubtedly ignited my von Sternberg obsession. Mulholland Dr. got bumped from a recent edition, but I suspect it will return, as it's finally settling in as the definitive David Lynch film. 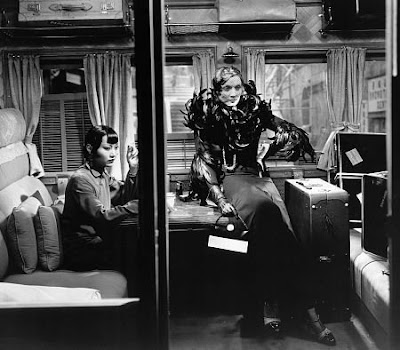 So he list is the perfect way to expand your cinematic horizons, a gateway drug to greater things, from the fairytale decadence of Jean Cocteau films, to the dark visions to Kenneth Anger, to everything you need to ride the Czech and Iranian new waves. I've been sprinting lately toward that magical 800 number, but hell, I don't even look at the list much these days because it did such a damn good job of opening my eyes to what's out there. I suspect that it will take some time to polish off the last 201, partly for availability, but mostly because my interests now are positively sprawling. That's all I could have asked for. At the end of the day, I can complain about what they added or what they left off, but I wouldn't feel entitled to had I not sat through the hundreds of fantastic recommendations the list does make.

Labels: 1001 Movies To See Before You Die, Lists, Rio Grande

30 titles taken down almost painlessly (Jacob's Ladder, Female Vampire, I'm looking at you), which means it's pointless awards time here at The Library of Babel. Last year's winner was Antonia Bird's cannibal soiree Ravenous and favorites predating these awards were Deep Red, Repulsion, and Eyes Without a Face. I will say that this was an excellent crop of horror, but I'll spare any more commentary and leave you with the nominations/winners/and other assorted titles.

Best Creature
The Demon - Night of the Demon

Best Evil Child
The Unborn Baby - Who Can Kill a Child


And now for some nominees... 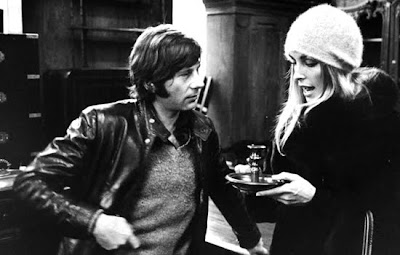 
Best Death
Death by piano! - House
That's what you get when you try to drown weird kids who make friends with prepubescent vampires - Let the Right One In
Hungarian Colonel Sanders finishes things at last - Martin
Karswell that ends well - Night of the Demon
The kids that get clubbed with the boat paddle - Who Can Kill a Child? 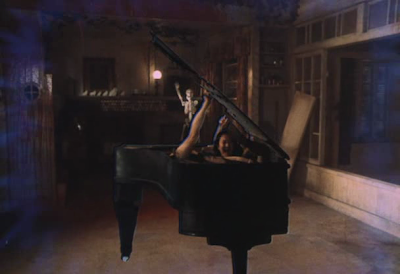 Theo and Eleanor trapped in the bedroom - The Haunting 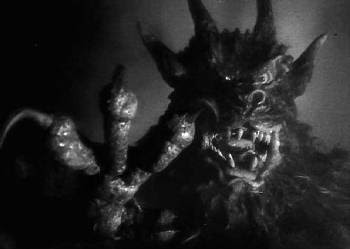 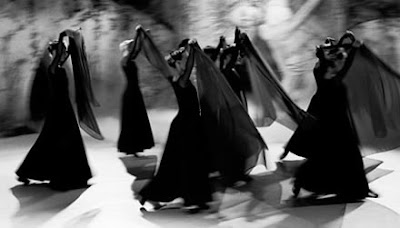 9. Dracula: Pages from a Virgin's Diary 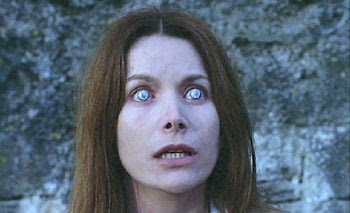 8. The Grapes of Death 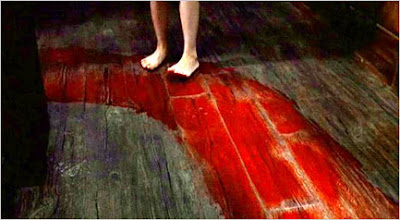 7. A Tale of Two Sisters 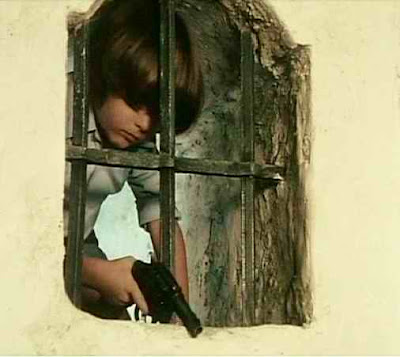 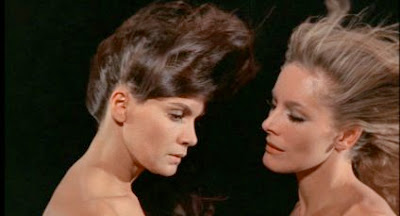 4. Lizard in a Woman's Skin 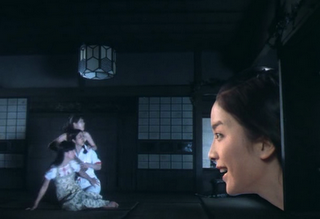 Posted by Tristan at 7:20 PM No comments:

It's In The Trees! It's Coming!

And so October ended, and all total, I had caught up with 30 horror films, just one shy of my goal of one per day. So the extra titles in my netflix cue (that means you, Blair Witch Project) and those backed up on my shelf at home (The Terror, Jingoku) will have to go into time out for a while, because I'm just a bit tired of all the creatures and curses and killers and even, yes, even the lesbian vampires.

But not so tired that I can't wrap up the month with my final four reviews, with the rundown followed by my second annual horror awards. This last batch was probably the most varied featuring a 50s B-movie classic, a tense Danish thriller, a Hammer vampire film, and hands down one of the most brilliantly bizarre movies I've ever seen. I'll go in that order. 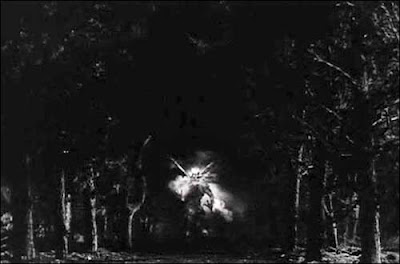 Night of the Demon (Jacques Tournier, 1957)
So that's where the audio sample that kicks off "Hounds of Love" comes from. Bonus points for being referenced in one of my favorite songs, not to mention the perfectly calibrated restraint that keeps this film so damn creepy. I've always liked Tournier as a director - he knows how to accomplish a lot with a little - and this is his finest I've seen so far. The demon itself, glimpsed only briefly in the opening scene, is terrifying, and we never linger on him long enough for the meager budget to show its seams. The threat remains very real, especially in the scene where Dana Andrews flees for his life through the woods, pursued by the pulsing ball of light that we know materializes as the monster. And there's Peggy Cummins too, not in a role as wonderful as hers in Gun Crazy, but it was still nice to see her again. 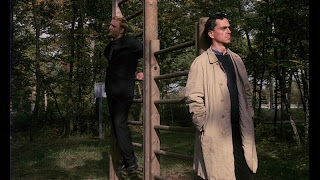 It's only in the final act that The Vanishing becomes a horror film, but horrifying it absolutely is, even if the surprise at the end of the line has been beaten to death lately. Which isn't to say it was the first film to go there (and yes, I'm probably being needlessly evasive) - hell, I was immediately reminded of Poe's The Cask of Amontillado - but for all the mounting mystery surrounding Rex's missing girlfriend, the grim answer he foolishly seeks is surprisingly worth the buildup. It all succeeds because of Bernard-Pierre Donnadieu, whose calculating killer Raymond Lemorne belongs on lists of great cinematic villains. Unsettling, but not particularly threatening to look at, he bottles a deranged psyche that gets explored on a level most murders aren't allowed. More fascinating still, he's a formidable foe when facing down Rex, but we see Raymond hard at work sharpening his wits, learning through his failures how to pull of the perfect abduction. Oddly, the unknown we fear is not Raymond himself, but the fate of his victim, Rex's girlfriend Saskia. This question drives the entire film, a masterpiece of suspense that I suppose even Hitchcock would have admired.

The Kiss of the Vampire (Don Sharp, 1963)
The third and final Hammer film on my roster may not have quite had the bite of the first two (The Vampire Lovers and Quatermass and the Pit) but it does nicely support their reputation for doing vampire movies better than just about anyone. There's no Christopher Lee her, nor Peter Cushing, but the cast all turn in decent performances and the Gothic overload of the sets and costumes is enough to keep things interesting. There's also a vampire ball, not as splendid as Roman Polanski's staging, but still, vampire's dancing - who can resist? And that picture, none other than our hero, sporting the latest in devil masque fashion and getting soused at the ball, probably because vampire's are very cliquish and left him on the sidelines. It doesn't bring anything new to the vampireverse, but I liked it plenty and will definitely have more Hammer queued up next year.

House (Nobuhiko Habayashi, 1977)
Seven bouncy young schoolgirls spend the night in a haunted house and are picked off one by one by mysterious forces. House is an oddly conventional plot disguised in a film that is essentially Wonderland on acid, complete with a fiendish cat that signals impending doom. It's some amalgam of storybook sets, off-the-wall editing tricks and scatterbrained anime, and the film runs the course from Looney Tunes antics to goofy melodrama to musical interludes to legitimate horror. It belies definition, surely easy to dismiss from American eyes, but my God, what manic fun this was, one of the few films that ever felt really delivers on the "a little bit of everything" motto. Seriously, there's some killer kung-fu here, and drop-dead gorgeous visuals (haunting though they often are), and one unlucky girl being consumed at great length by a vicious piano. Moreso, somewhere in all this there are actual moments of poignancy, which escape mawkishness thanks to the schizophrenic nature of the rest of the film. It aught to be a big ol' mess, but it's not nearly, probably because it's at least consistent in its craziness. Great film or not, that's hard to pull off. 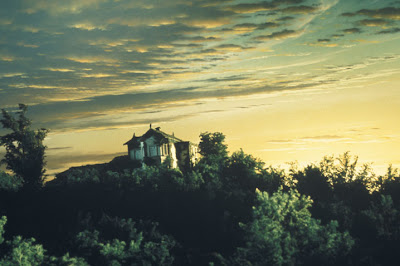 Posted by Tristan at 5:37 PM No comments: