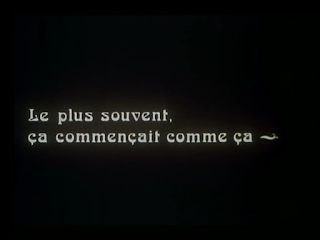 I've been away too long. I've been busy. Lot's of re-acclimating. You understand. And even when I was here in the last year, I wasn't focused. Certainly not consistent. And I feel terrible about that ~ really, I do ~ and I do believe I have a remedy.

Settle down on the fanatical listing, finally accept that you all have more to teach me about music than I ever can teach you, and bring this back to basics. Which is to say, the thousand or more reasons I can think of to fall in love with cinema. An unranked rundown of greatest films large and small, unfurling one by one, maybe as I see them, maybe as they surface in my thoughts and dreams, to be looked upon as nothing more or less than a blindingly cool list of recommendations.

In short, my Canon.

You may have come across my top 100. That's not a canon. That list is a snapshot of my taste in film in the months immediately after my college graduation, and it amazes me just how much I've changed in the few short years since that came into being. Notable, I suppose, is my waning interest in ranking - hence the current project - and I'm not sure whether my resignation to the futility of such pursuits is from growing wiser or just increasingly jaded. Both, I don't doubt.

Anyway, I've loved and loathed and obsessed over many a film in the past few years, but despite everything, my very favorite remains Jacques Rivette's CELINE AND JULIE GO BOATING. And that, friends, is as good a place to start as any. It's a good film for beginnings. Freewheeling. Circular. Groundbreaking. Rivette once said of Rossellini's VIAGGIO IN ITALIA that is was a door through which all cinema must pass, but with all due respect to that masterpiece (I don't doubt a future entry in this Canon), Rivette's own magnum opus is for me that door. It is, quite overtly, a film about finding your way between the walls, stepping into a wonderland where narrative structure as we know it is scarcely held sacred.

My kind of movie. 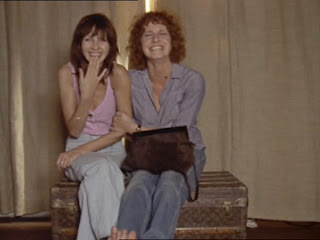 I don't intend to ramble on. The film is structured around the whimsical friendship of two women, who through the course of the story, find their way into an imaginary house, meddle in a recurring murder plot, and, like the bamboozled bourgeoisie in THE EXTERMINATING ANGEL, devise an improbable solution to an improbable scenario. If that sounds even vaguely in your wheelhouse, then you owe it to yourself to track this one down. MULHOLLAND DR couldn't exist without it. Hell, having seen it, I'm not sure I could exist without it. Which is, of course, why it's numero uno. All films in this Canon may be created equal, but since their has to be an inaugural entrant, here was the only logical beginning ~ the door though which every other film will inevitably pass.
Posted by Tristan at 12:39 AM